Arunachal is famous for weaving, bamboo work, carpet making and wood carving. It is also famous for lovely cuisine which is mostly devoid of any spice and is nutritious due to generous use of herbs and vegetables.

Do you know that the sun rises earliest in this part of the country? Well, this is where the name Arunachal comes from - 'Arun' means sun and 'achal' means rise.

Staple food of people is rice which they eat along with fish, meat and green vegetables. Various varieties of rice is available. Well, to name the most loved vegetable - lettuce! It is prepared by boiling it with green chillies, ginger and coriander. Boiled rice cakes wrapped up in leaves makes for a really sumptuous snack. 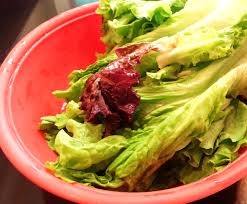 Momos are popular too. Method of preparing common dishes varies in Eastern districts -Tirap and Changlang. Generally, people eat non-vegetarian food. However, use of minimum spices in food makes it quite bland but the inclusion of herbs imparts that special flavour which makes Arunachal cuisine so delectable.

Cuisine in this part of India is really nutritious as main ingredients of tribal cuisine includes herbs, organic vegetables and fermented bamboo.

There are more than 80 Mongoloid and Tibeto-Burmese tribes and sub-tribes and they have their own language, customs, clothes and headgears! Major tribes include Adis, Apatanis, Daflas, Monpas, Mishmis, Wangchu, Noktey, Akas, Nishis and Sherdukpens. These tribes are peace loving and enjoy festivals and food together. 'Thukpa' is a traditional dish which the Mongpa tribe relishes.

There are two different ways of preparing rice in Arunachal Pradesh - Dung Po and Kholam. Rice is relished with fish curry. Fish soup or dried fish is loved by one and all. Fish soup prepared from fresh fish is called 'pasa' while fish curry is known as 'ngatok'. Brass utensils are used in most households here for this reason.

Dung po is popular way of preparing rice. Two brass utensils are used for this purpose as it is believed that brass utensils impart a special taste to the food! The rice is covered with leaves to avoid it from scattering as the pot is hollow from the bottom. The second pot is filled with water for generating steam. The rice is wrapped in leaves while serving.

This is a unique process of cooking rice as instead of utensils, a bamboo tube is filled with rice and water. The bamboo tube measures 2 1/2 feet in height. it is kept beside traditional heath which imparts heat enough to cook the rice. Before serving the rice, outer layer of bamboo is incised. 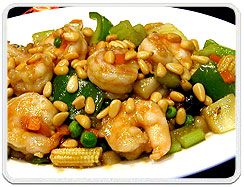 Chicken is prepared with rice powder. Rice is fried without oil and then ground into powder. Rice powder is added to half cooked chicken with herbs and mild spices and left to boil.

This is a fish curry which is prepared by slicing fish and first marinating it with traditional spices. An extremely hot medium size stone is kept amidst the fish which is wrapped in a particular type of leaf (or banana leaf) and then covered with charcoal/ashes. Now the fish is left to be cooked!

Meat of medium size ducks (without cutting) is sprinkled with lime juice and salt. Then it is roasted on charcoal fire.

It is prepared from boiled noodles and cooked in a paste of spices and daun kesom. Garnishing is done using pineapple, chilly, cucumbers etc.

People here depend on forest based produce and practice permanent as well as shifting (Jhum) cultivation. Crops and vegetables grown include maize, paddy, millet, buckwheat, soybean, french bean, wheat, potato, cauliflower, chilli etc. They use fermented food which is rich in nutrition. This food has curative properties to keep people safe from many diseases. 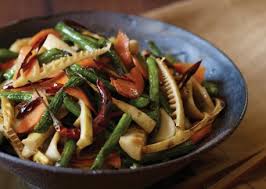 Tender bamboo is cooked in low fire after mixing baking soda and other spices. The dish is served hot and crispy!

The most relished soup is 'pasa' which is fish soup prepared from fresh, raw fish. Ground Ginger, garlic, chilly, makat, phoi hom (scented spice leaves), pee chim khim are added to minced meat paste. Juice of 'ooriam' (Khumpatt) leaves is added which gives the greenish tinge to the soup. Do you know that tribal rulers used to prepare only this soup instead of cooking food to avoid aroma of cooking reach far and wide and be safe in their hideouts!

Dre-thuk is prepared from minced meat, noodles, beet root (to give it pinkish colour), bamboo shoot, mustard leaf and herbs.

Apang - An Alcoholic Drink for all Occasions 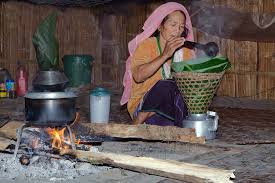 Apang or rice beer is prepared from fermented rice or millet. It is one of the most popular beverages and alcoholic drink in this region. Preparation of this drink takes 3 months! The process involves drying, smoking, fermenting and filtering the rice concoction. During festivals it is drunk out of a bamboo shoot.

Mopin, an Adivasi festival during March and April is the time when gallons of apang is prepared. During Solung festival which is celebrated during monsoon in July and August, apang is also prepared in plenty. Apang is offered to everyone present on the day when India bison and pigs are slaughtered early in the morning.

Dree is another festival when 'apang' is prepared and this local beer is drunk after cleaning the house and surroundings.

Themsing: It looks like black tea and smalls nice. It is prepared using finger millet, bong or barley or mixture of both.

Rakshi: It is prepared from rice, barley, finger millet and maize. Grains are cooked till soft and yeast tablets (pham) added. They are then spread on 'charang' or bamboo mat for fermentation for 2 to 3 days. Later, rakshi is extracted by distillation.

Mingri, Lohpani, Bhangchang: When preparing these, precaution is taken not to touch the concoction by hand. Wooden spatula (Cchok) is used and Khajir (seive made of bamboo) is used for seiving purposes. Remaining paste after extraction of mingri and lohpani is used to obtain bhangchang which is white in colour. Bhangchang is consumed by poor people while mingri and lohpani find takers within the middle class. After preparation of Mingri, Lohpani and  Bhangchang, the residue is given to the cow.

Chhurpi: Chhurpi in the house of Monpa tribe depicts social status. The dish is of three types --- Chhur singha, Chhur chirpen and Chur pupu.Fresh chhurpi is called chhur singba. It looks more like paneer and is made of yak milk after fermenting milk by adding extract of crab apple fruits (thung). Chhurpi which becomes quite old is called chhur pupu. Marchang made from chur pupu is very popular.

Shya Phrum Rimom: Shya (meat) Phrum (paneer) rimom (blue green algae) is prepared by boiling meat, adding chilli (solu) to it and then cooking rimom and chhurpi in low flame for some time. Yak ghee is added and then the dish is served with local rice or kongpu (finger millet).

Chhur Chirpen: After boiling yak milk, cut fruits of thung are added for fermentation. After removing water, remaining material is kept for 3 to 4 days till it changes to a cramy-yellow colour. Now, it is shaped by pressing it with stone and kept near fireplace in the kitchen. Gradually, chhurpi turns into light yellowish brown in colour. This is called chhur chirpen. Chhur chirpen, ghee and solu krepu are eaten with rice.

Chhurpi kept in yak skin (mongnang), after properly sealing it, can be kept for 3 to 20 years! Chhur pupu is used for curing stomach ache. Soyabean (libi) chhurpi is prepared during winter months (October to February). The drained water is used for applying on dry skin or cracks of foot during winter.

Putang is recommended against diarrhoea. Putang (noodles made of buckwheat or teeta phadphad flour) is given for curing measles, stomach ache, typhoid and maintaining overall health of old and sick people. Chhur pupu and solu krepu are ground into paste with hot water and then served with putang.

Fresh or shade dried leaves of teeta phadphad (buckwheat) are added to vegetables and given to diabetics and those suffering from gastric trouble. Buckwheat flour is made into paste after adding cold water. It is then cooked and eaten with chutney by old people as it is very nutritious.

Fermented foods are an important aspect of the cuisine for tribes residing in Arunachal Pradesh. Fermented food is used to prepare daily recipes and traditional dishes too. The most popular alcoholic beverage named 'apang' is fermented for many days before it is consumed during get together and festivals.  Fermented food items comprise of Churapi (cheese prepared from yak milk), Pikey Pila, apang, Bamboo tenga, Tapyo, Ennog, Ipoh and churkham etc.

Food of Arunachal Pradesh is simple, rich in flavours, nutritious, contains negligible oil and spices and tastes more natural. Addition of herbs and fermented products adds to the taste. You have to develop your taste for relishing food from Arunachal Pradesh. Simple people, simple food - light on your stomach and with aroma and taste that will surely stay with you for a long, long time to come!