In addition to the different naturally beautiful and historically significant tourist places, the state of Arunachal Pradesh also has a number of religious sites. The state is dotted with many monasteries and gompas spread across Tawang, Bomdila and other important towns of Arunachal Pradesh. 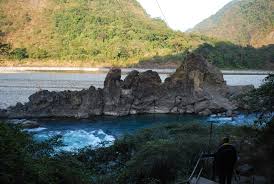 Parasuram Kunda is one of the famous temples in Arunachal Pradesh. The temple is dedicated to the legendary figure Parusuram who is said to have washed himself off his sinful act of killing his mother and to ease the axe off his hands,in this Kund. This is a very revered temple in Arunachal and a holy dip in the sacred kund is believed to wash away one's sins. The temple attracts many Hindu devotees every year during Parasuram mela organized in the month of January. 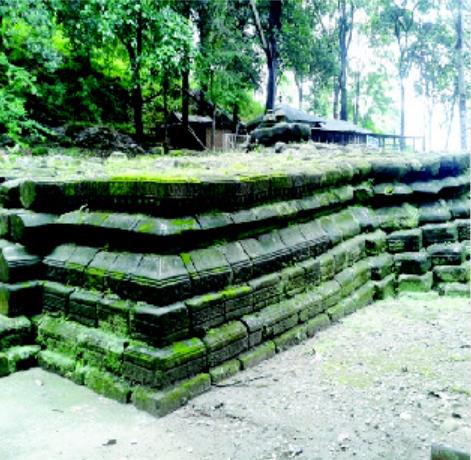 The Akashganga Temple also called Malinithan temple, located 12-km from Malinithan, West Siang District, is a shrine of Goddess Durga. Constructed in the classical architectural style of Orissa, the temple is associated with the legend of Daksha Yagya and Sati's self-immolation.

Tawang Monastery is one of the famous Buddhist monasteries in Arunachal Pradesh. Situated atop a beautiful mountain, at a height of 3300 meters, the monastery has stupendous 8.3 meter high Golden statue of the Lord Buddha. Also housed here is the establishment of the Rimpoche or lama incarnate.

The Tawang Monastery is the largest monastery of India. It was founded by Merak Lama Lodre Gyamtso in 1680-1681 according to the wishes of the 5th Dalai Lama. The monastery is situated close to the Tibetan border in the valley of the Tawang-Chu which flows down from Tibet. The monastery is located at an average elevation of about 3,300 meters and occupies an area of 140 m².

The present site of the monastery has a legend behind associated with it. This legend of the present monastery site goes to have been chosen by a horse owned by Merag Lama Lodre Gyamtso. He was a monk who was on a search for a place to build a monastery. As he couldn’t find any place, he decided to sit for a prayer to guide him for a divine place. As he opened his eyes after prayer, he saw his horse missing.

When he went out for its search, he found it atop a hill names Tana Mandekhang. He then went to the hill and started working and gathering people to build up a monastery there. This monastery was founded by Merag Lama Lodre Gyamtso in late 1681 according to the wishes of Nagwang Lobsang Gyatso, the fifth Dalai Lama.

The sixth Dalai Lama, Tsangyang Gyatso, was born in the nearby Urgelling Monastery, 5 kms away from the town of Tawang. During the border issue of McMahon Line in 1914, Tibet gave up several areas of its territory including Tawang and this monastery to British. When the 14th Dalai Lama fled from Tibet following a rebellion against the Chinese Government, he crossed into India on 30th March 1959 and stayed in Tawang Monastery before leaving for Tezpur in Assam.

He visited Tawang many times after that. During the Sino-Indian War of 1962, Chinese troops occupied the monastery destroying parts of it. Later after their retreat, Tawang and the monastery came under Indian control. However, in the past few years, China has always claimed Tawang as a part of Southern Tibet. China has also objected the visit of the 14th Dalai Lama to the Tawang Monastery though he has visited many times. Many people from this town and Arunachal Pradesh attend the religious discourse of the Dalai Lama. The Tawang Monastery is one of the largest monasteries of Mahayana sect in Asia. The monastery is known as Galden Namgey Lhatse in Tibetan. This name translates to ‘celestial paradise in a clear night’.

The monastery is three-storey high and is enclosed by a 610 meters long compound wall. The complex contains 65 residential buildings and 10 other structures. The monastery has a capacity of about 700 monks and is home to around 450 lamas. There is a three storied Pakhang library with a collection of valuable old scriptures mainly Kanjur and Tanjur, numbering around 850 bundles. There are also 400 year old scriptures and other old books both handwritten as well as printed. Many of these manuscripts are in gold.

The monastery also has a small printing press. The most significant part is the Dukhang or the Assembly Hall which has a 27 feet high golden statue of Gautama Buddha. Towards the left of the altar, there is a silver casket on the northern wall covered in silk and contains the Thankas of Goddess Dri Devi (Palden Lhamo), who is the presiding deity of the monastery. This was given to Merak Lama by the 5th Dalai Lama and is known as Ja-Droi-Ma which means it has the warmth of a bird and defines living in itself.

The monastery also has a Center for Buddhist Cultural Studies where Tibetan Buddhism thoughts and Arithmetic, English and other subjects are taught to young monks. The monastery also controls various nunneries and Gompas in the region. This monastery was renovated by the 14th Dalai Lama during his visit here. The Tawang monastery is a designated ‘manuscript Conservation Centre’ under the National Mission for Manuscripts established in 2003. 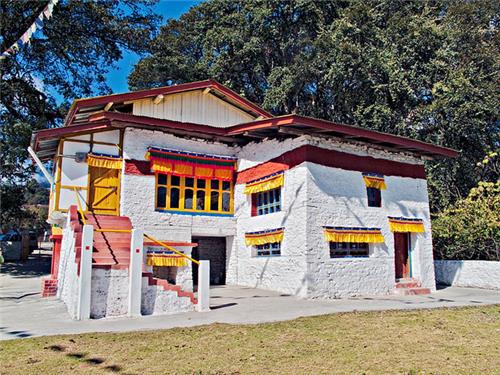 Located 5 km from the south of Tawang Township, Urgelling monastery was built by Urgen Sangpo who was the youngest brother of famous Treasure-Revealer Terton Pempalingpa.

Arunachal Pradesh, the land of beauty in the north – eastern part of India, is a state where Buddhism is followed and with utmost dedication and devotion. Built in the year 1965, the Bomdila Monastery is also known as Gentse Gaden Rabgyel Lling Monastery which is rather too long a name to say, hence Bomdila! 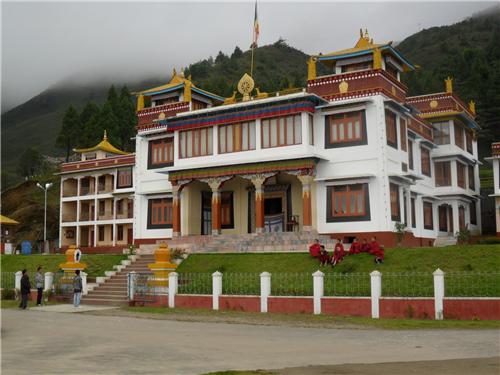 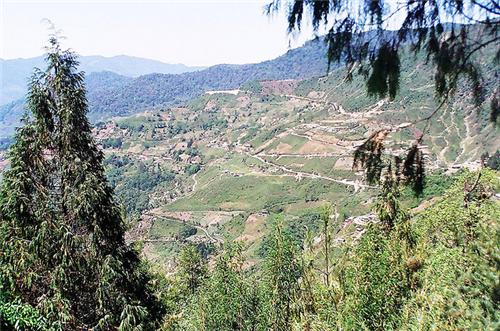 designed and hence its architectural qualities are also worth praising. The monastery has a huge prayer hall which is used by the Lamas to offer their prayers. The monastery is a quarter to the Monks and a temple of Lord Buddha.

The Bomdila monastery strictly follows the rules and regulations of the Buddhist religion. The religion imparts the teaching which is traditional and follows practices of tantrayana. The teaching here comes from the trained and educated monk themselves. Bomdila monastery primarily follows the Mahayana school of Buddhism and it celebrates a lot number of festivals here in the monastery. Some of the celebrated festivals here are Losar which is a 15 day festival, SakaDawa celebrated on the fourth month of the Lunar calendar and marks the enlightenment of Lord Buddha and Lhabab Duechen festival, which marks the reincarnation of Buddha in his Shakyamuni form. 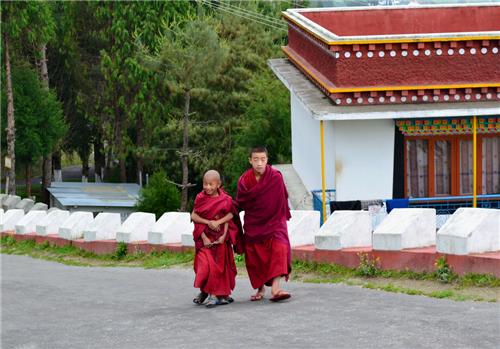 Bomdila is a wonderful place in the state of Arunachal Pradesh which marks the celebration of natural and scenic beauty and traditional Buddhist culture. It is one of those breathtaking places where the climate remains overwhelming almost all round the year with summer being the peak tourist season. So, make it a point to make it to Bomdila whenever you set foot in the north east India. It is sure to mesmerize you. 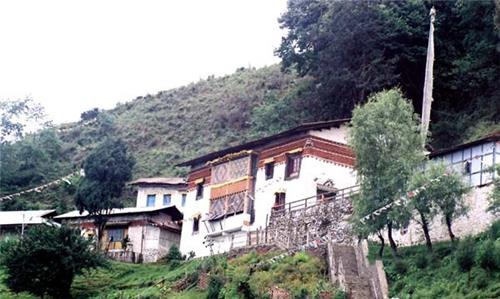 Situated about 80 km from Bomdila towards Shergaon Lhagyala Gompa was built by Kachen Lama in the 7th century. Lamaism got a strong foothold among the tribals when the gompa was built. The monastery plays significant role in the socio-political and religious lives of the people. The gompa serves as the storage of the antiquities of the Buddhist Sectarians. Lhagyala means storeroom of more than 100 large icons. The interiors and the structures of the gompa are beautifully decorated. 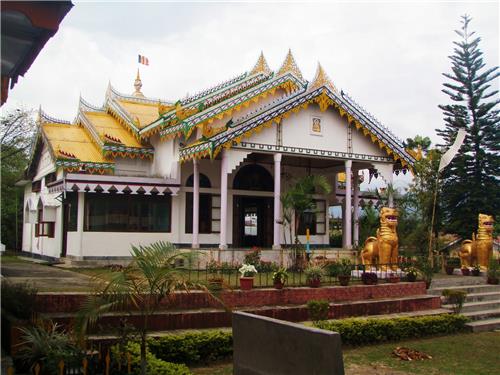 The Buddhist Temple is situated at Itanagar. Constructed by the Dalai Lama the temple is located atop a hill and there are green gardens surrounding it. The Buddhist temple is a yellow roofed shrine and reflects the Tibetan influence. The temple provides a good view of the capital and also the surrounding areas. In front of the shrine a stupa has been erected. The Dalai Lama planted a tree by the side of the shrine. 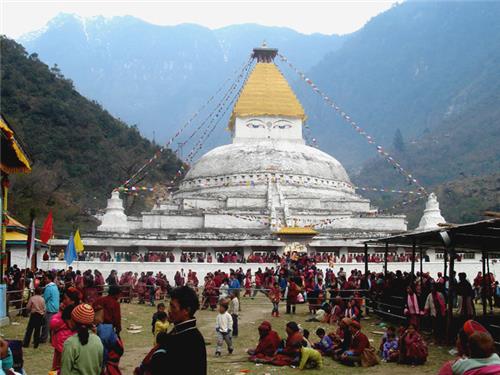 This Stupa is the largest stupa of Tawang having a height of about 100 feet. It is situated about 90 kms from Tawang in Zemithang on the banks of the Namjang Chu River. The Gorsam Chorten is believed to have been constructed in the early part of 12th century by a Monpa monk named Lama Pradhar. The stupa has a semi circular dome rising high into the sky and it rests on a three-terraced plinth. There are four miniature stupas are set on the four corners of the lower most terraced of the plinth. 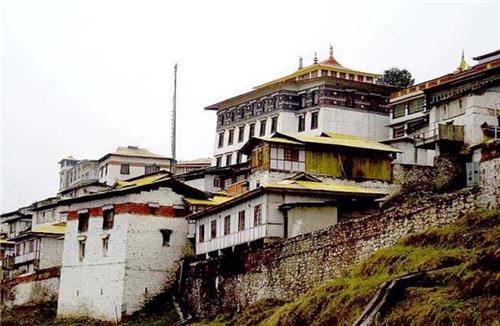 The Regyaling Gompa is located at a distance of about 1 km from the Tawang town. It was constructed by the former Rigya Rinpoche. However, after his death, the monastery is being looked after by his secretary, Chang-sey. The reincarnation of Rigya Rinpoche, Rev. Tenzin Tsedhar is currently completing his education in South India. The monastery is surrounded by green pine grooves thus enhancing its beauty.

This Gompa is located around 45 kms from Tawang. This monastery is perched atop a ridge on a hillock and is surrounded by coniferous forests and lofty mountains on all sides. The site of this Gompa is believed to have been blessed in the 8th century AD by the visit of Guru Padmasambhava. This is the same place where the Guru has meditated. It is one of the oldest monasteries of the Tawang district. 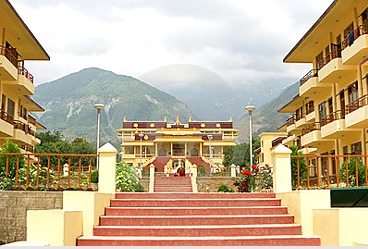 The Gyuto Tantric monastery is situated at Tenzingaon, 80 km from Bomdila. It lies on the Bomdila-Kalaktang route.The name of the monastery was renamed as Tenzingaon Tenzin Gyatso after the name of the 14th Dalai Lama and was built in 1975-76. The main inhabitants of the monastery are the Tibetans. It is a two-storied building and comprises of a big hall for assembly purposes. The monastery imparts training to the monks and teaches them about tantrism. Grammar, poetry of Tibetan script, English, Hindi, mathematics and general Science are taught to them.

Brahma-dung-chung- Ani Gompa is located about 8 kms north of Tawang. It is one of the oldest Ani Gompas in town. ‘Ani Gompa’ means abode of the nuns. This Ani Gompa was constructed in 1595 AD by Lama Karchen Yeshi Gelek of Tsang province of Tibet. This nunnery is a home to about 45 nuns also known as Anis.

This Ani Gompa is located about 28 kms from Tawang on the Ghesila mountain range near the Lhou village. This nunnery houses about 30 nuns. The new Singsur Ani Gompa was built by the previous Rev. Gonpatse Rimpoche in 1960. The old Singsur Ani Gompa is also present amidst the ‘Shaa’ (huts) of the Anis. 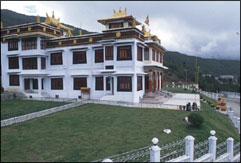